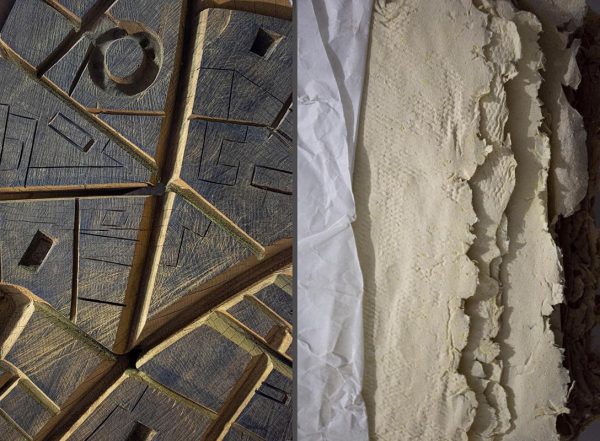 The exhibition will present the works of two artists from France and Ukraine: Aude Guillet (Object) and Oleg Kapustyak (Sculpture).

Aude Guillet comes from sunny Provence. She lived in Ukraine for a long time and defended her diploma at the Sacred Art Department of the Lviv Academy of Fine Arts. The theme of her works-objects is a kind of exploration of space using light, ephemeral materials.
Aude Gulliet’s artistic activity is d deeply related to the spiritual search for ways to identify the invisible.

“An artist exhibiting his works always finds himself in an extremely sensitive situation when, through his art, he not only shows the way, but also opens it for others.
The artist is filled with the life of the world, transferring it through himself and pouring it onto paper and wood. On every cell the material gives him.
In Formae Fragiles I used different types of paper (sometimes made by me). I folded them as if “crushed”, sometimes “sculpted” like a sculpture, or “blown” from the inside. My works should become a kind of bridge between me and the world, to reveal a space where the world can be touched for a moment…
The fragility of forms, poverty of material, white on white – this is the essence of presence that you need to look for…” A.G.

The artist was born in France.
After training and working as a midwife, Aude Guillet joined the Points-Coeur Association in 1993 and went on a mission to Peru, France, Kazakhstan and then Ukraine.In the years 2007-2011 she studied at the Lviv Academy of Fine Arts at the Faculty of Sacred Painting. Since then, he has been painting icons and sacred paintings. He likes to study the properties of color. The works are made in the tempera technique, using golden and transparent ink.
He currently lives and works in Lviv, Ukraine

Oleg Kapustyak is one of the most famous and powerful contemporary sculptors of Ukraine. His works are known far beyond the borders of Ukraine. This is his second show in Poland this year. Some of the sculptures were presented in Warsaw in June at the Kortegarda Gallery at the “Maps” exhibition.

“My maps are not only 100% documentation of some city buildings, but also objects torn out of the city plan that surround me and disturb me…”O.K.

In 1985, the artist graduated from the Lviv Institute of Applied and Decorative Arts, majoring in ceramics. His teachers were Dmytro Krvavich and Mykola Posikira. From childhood, he was fond of painting, but Krvavych saw in him the talent of a sculptor and advised him to sculpt. In 1989, under the patronage of the sculptor Lubomir Jaremczuk, he was admitted to the creative group of artists in Sednewo, where he worked for two months in the same studio together with Peter Antip. Drawing inspiration from his temperament and vision of form, he created a series of works in steel: “Fighting a Rat”, “Walpurgis Night”, “Portrait of a Colleague”. For several years, together with his Polish friends, he was involved in the renovation of tombstones and monuments at the Łyczakowski Cemetery. Restored min. the tombstone of the Szaszkiewicz family.Earlier, Oleg Kapustyak also renovated Pinsel’s sculptures at the Juranski Cathedral or the figure of the goddess Diana in the Market Square, and even the Opera Theater in Odessa. In 2015, he participated in the restoration of the monument on the grave of Ivan Franko as part of the project of the Ministry of Culture and National Heritage of the Republic of Poland.

The project was created with support
and co-financing of the City of Gdańsk.
Electronic Catalog of an exhibition.

Photo relation from the opening:

Half opened art studios at the Fanabaz

The Easter holidays are coming ..