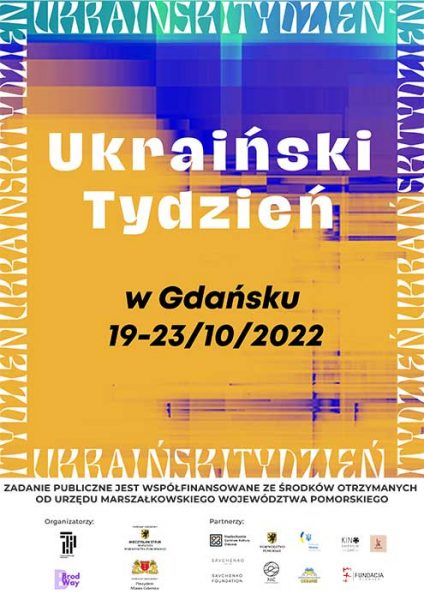 Ukrainian Week in Gdańsk
The Ukrainian week in Gdańsk will be held on October 19-23, 2022 in Gdańsk. This special time will be enriched by workshops and meetings with special people. There will also be an artistic accent, on Wednesday the opening of the exhibition of posters by the Ukrainian artist Dante Alighieri “terrorussia” will begin, and on Friday a concert by Solomija Czubaj – a wonderful singer who popularizes Ukrainian music and poetry.
The event will be opened by Olha Meńko – President of the Poland-Ukraine Institute Foundation at 4:00 pm, we will start with a discussion “What are we not talking about in public space, if we are talking about Ukraine”. On Thursday, a meeting with Tais Zolotkowska, presentation of the book “Niesezon” and workshops on creative writing. Friday will focus on film and music, we invite you to a meeting with the aforementioned Solomiji Czubaj and a screening of the film “Czubaj. Speaking Again ”- an opportunity to get acquainted with the story about the poet Hryhoriy Chubay. Sobota with Marta Zvarycz – Ukrainian painter, lecturer, active social activist – art workshops, and with Irena Karpa – presentation of the book “Just don’t tell anyone about it” and literary-therapy workshops.
The events will take place in many places, as part of cooperation with partners: the Ukrainian Consulate in Gdańsk, Savchenko Foundation and Savchenko Gallery, European Solidarity Center, Cafe chamber cinema, Pan Kotowski restaurant, NIĆ. A cafe-bookstore.
This time is a special occasion to meet new people, broaden your interests and knowledge about Ukrainian culture. The wide program of the event aims to enable the participation of as many people as possible in this year’s Ukrainian week in Gdańsk.
Organizers: Fundacja Widowisk Masowych and Broadway Ag.
Partners: Ukrainian Consulate in Gdańsk, Savchenko Foundation and Savchenko Gallery, Oblate Center for Education and Culture, Baltic Sea Cultural Center, Cafe Chamber Cinema, Pan Kotowski restaurant, NIĆ. A cafe-bookstore
The project is carried out with the financial support of the Pomeranian Voivodeship Marshal’s Office
The event is held under the honorary patronage of the Marshal of the Pomeranian Voivodeship and the President of Gdańsk

The author, Dante Alighieri, is a Ukrainian military man who defended the Motherland from the beginning of the invasion of Ukraine by the Russian Federation, joined the ranks of the Ukrainian Territorial Defense Forces. The emotion and horror he saw overwhelmed him, and in his free time from fighting, he expressed all his pain in pictures and posters. The exhibition entitled “terrorussia” through the art of the poster expresses the direct attitude of the author to the crimes committed by the Russian terrorist state on the territory of Ukraine.
An acoustic concert by the singer and poet Travaaa (Ulyana Savchenko) will be held at the opening of the exhibition
Venue: Savchenko Gallery
The event will take place as part of the Ukrainian Week in Gdansk
Organizers: Foundation of Mass Performances and Broadway Ag.
Partners: Consulate of Ukraine in Gdańsk, Savchenko Foundation and Savchenko Gallery, European Solidarity Center, Trans-Baltic Culture Center, Cafe cinema, Pan Kotowski restaurant, NIĆ Cafe and Bookstore
The project is implemented with the financial support of Urzędu Marszałkowskiego Województwa Pomorskiego
The event takes place under the honorary patronage of Marszałka Województwa Pomorskiego and Prezydenta Gdańska