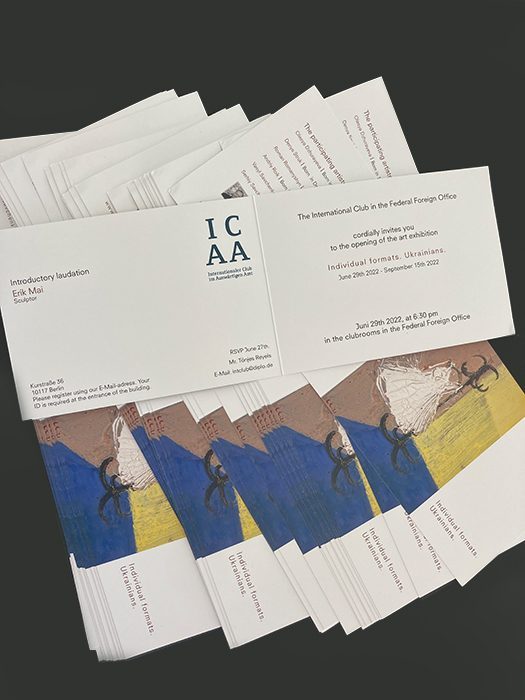 Kurstraße 36
10117 Berlin
Please register using our E-Mail-adress. Your ID is required at the entrance of the building.

“A series of works by six artists is presented as the Savchenko Gallery Collection is located at the German Foreign Ministry in Berlin The series can serve as a very expressive and informative slice of contemporary Ukrainian art  It recreates several artistic generational styles along with the artist’s individual styles, formats, and worldviews.
All the represented artists are well known in Ukraine and abroad. The artists represented in the collection include: World renowned artist, Roman Romanyshyn. The very talented rising stars of modern art, Vasyl Savchenko (post-digital graphics) and Andriy Roik (painter). The mature and famed monumentalist, Ustym, Fedko, Olesia Dzhurayeva- an incredible graphic artist, who has won many global graphic contests. Denis Struk, a hypersensitive painter of tension and a Volunteer War-fighter for Ukraine since 2014. To top of the list of the collection of artists is Serhiy Savchenko, a master painter of over 30 years with works distributed globally and founder of Savchenko Gallery.
All these artists are united not only by a high level of mastery of artistic means, but also by a bright and expressive articulation of free artistic thinking and the presence of what we can call “artistic conscience”. This quality, of course, is mandatory for every artist, but, unfortunately, as in other times, still remains in short supply.
This deficit of truth and conscience concerns not only the sphere of culture, but
in our opinion; this was one of the important reasons that eventually led the world to the age-old Shakespearean question: “To be or not to be?”. This question is mentioned in each of the works of the Ukrainian artists presented here . The task of the viewer is only to have the ability to understand the dynamics of the art. But we will all answer it together with the civilized world, which we hope, has lost neither truth nor the conscience.”

All works presented at the exhibition were created until February 24, 2022. It was important for us that the audience recorded that important fact, which in the future will give an opportunity to realise the entire immeasurable chasm of losses that Ukraine is forced to endure now.
Each work presented at the exhibition contains its own measure of drama along with the awareness of the power of being.
What will we become after what we have experienced? This is a question that we would like to leave in the air of the exposition hall.

The greatest hazard of all, losing one’s self, can occur very quietly in the world, as if it were nothing at all. No other loss can occur so quietly; any other loss – am arm, a leg, five dollars, a wife, etc. – is for sure to be noticed”.
Soren Kierkegaard
Here I am presenting to you six established contemporary Ukrainian artists who represent six different styles of art and work in different genres. Some of them are women and some of them are men. You can notice how each individual style develops and how these styles work together collectively to speak for the whole group.
The purpose of this exhibition is to show that one does not need to lose her individual freedom to become a member of a bigger society. On the contrary, the bigger group benefits from the diversity of its members. Some members of this artistic group are younger that the others, some are more experienced, but all of them are united by a desire of finding and expressing their own talent. And what is talent? It is a natural ability to be good at something, especially without being taught. Talent multiplied by mastery and finest artistic schooling is something that everyone looks up in the art just like in a good glass of wine. The crop, the year, the land, the climate, the age. There is collective appreciation of the individual and the individual input into the collective, and without it the collective is not complete.
All works presented are part of the collection of Savchenko Gallery in Gdansk, Poland. Participating artists:
Olesia Dzhurayeva – multiple international award winner, graphics
Ustym, Fedko – established in monumental art
Andriy Roik – multiple international award winner bespoke paintings
Roman Romanyshyn  – multiple international award winner for painting and sculpture
Serhiy Savchenko – established in painting and multimedia
Vasyl Savchenko – emerging artist in post – digital graphics
Denys Struk- established in painting
Savchenko Gallery has been found in 2019, in Gdansk, Poland. As of February 2021, Savchenko Gallery conducts its commercial activities for the benefit of the Savchenko Foundation. Our Gallery is not only an exhibition hall and a platform for artists’ ideas. It also serves as a consulting, educational and art promotional platform. The gallery collaborates with musicians, architects, designers, cultural institutions, and representatives of many cultural initiatives internationally. Our main rules: openness, communication, high artistic quality.
From March 2022 Savchenko gallery works also as a Volunteer Assistance Coordination Center to  support the Defenders of Ukraine and  refugees – citizens of Ukraine who suffered as a result of Russian aggression.

Photos from the opening:
Photo by Hendrik Liersch  and Serhiy Savchenko