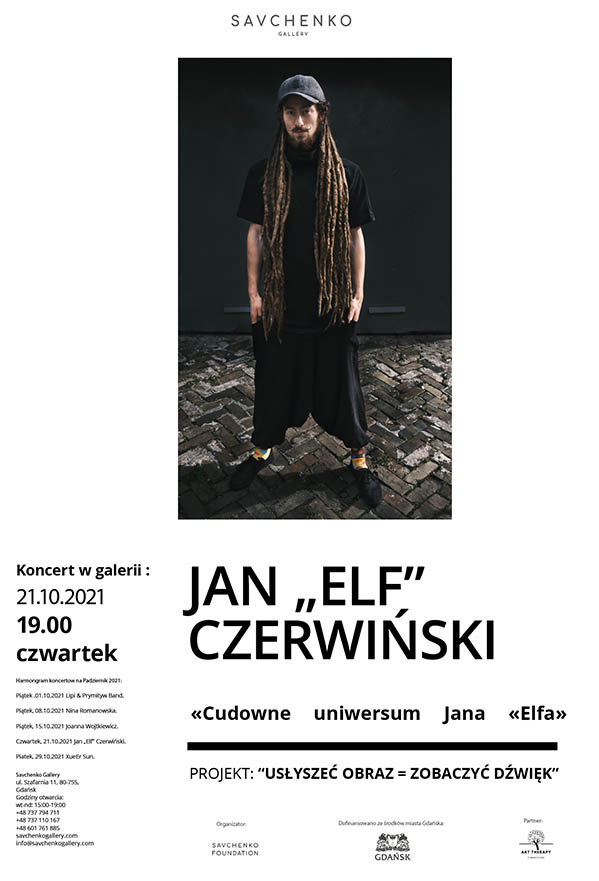 We cordially invite you to the fourth concert in the framework of the project “Hear the image = see sound“, which is supported and co-financed by the City of Gdansk within the “Small Grants 2021” programme.
This time, in the space of our Gallery, Jan “Elf” Czerwinski will perform once again.

A figure whose foundation of artistic activity is established by beatboxing skills acquired in 2006 and recognized at national championships (Polish Beatbox Battle Champion 2018 and 2019 Loop Station category, TOP4 WBW Beatbox 2017 Solo). Since then, the artist has been developing as a musician, showman, and entertainer in the rich Tricity environment, creating and supporting such projects as the duo B’loop, Wave of Change, Muzalians and the MusicEverywhere Choir.

His works are his own creations and personalized arrangements of well-known songs performed with the use of speech apparatus only (either live or with the use of effect processors and looping stations), drawing from many circles, but usually oscillating within the limits of reggae, d’n’b, rock and house genres. These compositions find their place at concerts with a relaxed atmosphere, but also in the theatrical space (Mololo’s performance “Little Red Riding Hood in the Gothic Stable”, which reached the final of the competition for the best performance of independent theater “The Best Off”, “Don’t Make a Scene” by the project group of Sopot Dance Theater, “Dream” by the Museum of World War II in Gdańsk.

Photo from the concert.