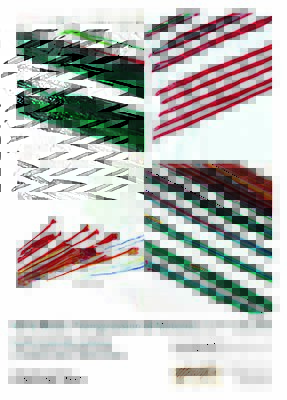 Oil and acrylic on canvas
“In my paintings, I invest the material with the human features and simply create the conditions for the internal catharsis. The material strives to follow the human. It tries to grow and progress”
Serhiy Savchenko in conversation with Olena Grubb
Gdansk – Istanbul, 2019
Oil and Water. Transgression of Material. The new series of paintings by the established Ukrainian contemporary artist Serhiy Savchenko explores the theme of movement of the material beyond its own borders. Serhiy Savchenko is the multimedia artist and participant of numerous international exhibitions and art residencies. In Oil and Water. Transgression of Material Savchenko’s main goal is to immerse the viewer into the powerful stream of the energy that the paint bears when it transgresses beyond the white enamel on the canvas. The transgression in this series is viewed as the phenomenon of the transformation of the artistic media into the “base matter” and represents the Ultimate Creative force that is not limited by the laws of duality commonly believed to dominate in the universe. The artist started working on the topic of spontaneity and absence of control over the absolute creative force of the material in 2009 in the series called Eruptions. In 2019 he introduced new elements into his concept and came up with the Oil and Water. Transgression of Material. The new elements enabled him to model the behavior of the material on the canvas – mainly allowing him to determine the direction of its flow.

The word transgression takes its origin in the ancient Latin and translates as an “act of breaking through the boundaries”. It conveys the phenomenon of transition from something seemingly impossible to something real. The topic of transgression is one of the leading threads of non-classical philosophy. It although has been of great interest to the classics too. Georg Wilhelm Friedrich Hegel, for example, argued that transgression is a movement beyond the social boundaries of existence and transcendence from the role of the participant to the role of the observer of the situation. Transgression is a movement of the essence of any phenomenon beyond its own limits, beyond its own borders and across the boundaries of impossibility in the process of the eternal development of the living material.
The artist reveals “In 2009 I have been invited to participate in a very interesting exhibition held in a small but notorious town of Novytsia. Novytsia used to be part of Ukraine and a great poet Bohdan – Ihor Antonych was born there. Now it is a part of Poland. The exhibition was held in a small ancient chapel. Previously I have never had a chance to try myself in the genre of sacred art. The invitation to participate came unexpected and became a big challenge for me. For this project, I have created my first series of seven abstract paintings called “Eruptions”. One of the paintings was invisible. The seven works followed the idea of the classical iconostasis depicting the story of the creation of the world. Every painting was inspired by its own symbolism. I was following the Genesis from the very beginning – starting from the simple earthy elements, such as stone or plant and moving towards the invisible creatures. In 2019 I felt the urge to return to this topic and to introduce new elements and new concepts into the series.”

French art historian and philosopher Georges Bataille has coined the termbase materialism. Base materialism comes as a concept of a certain absolute that overcomes the traditional division of the world into the material and ideal. In classical materialism the material gives birth to the spiritual and in classical idealism the spiritual overcomes material. Bataille claims that the existence of the duality per se limits the human perception of the boundless potentialities of the higher matter, which is the matter that the Ultimate Creator operates with. Base materialism is introduced as the third option, that is represented by the act of transgression of the material and its exodus beyond the boundaries of its own self. By deconstructing the duality between the material and ideal it establishes the new reality, where the options of the Ultimate Creator are unbound. Everything that has ever been conceived may materialize, and everything that has ever been materialized has been conceived.
Savchenko continues “A transgression is an act of deconstruction of stereotypes. It is a search for novelty through internal conflict. Everybody goes through the internal conflicts to achieve some new levels of understanding, the new level of consciousness. This conflict I have embodied in the combination of two opposing materials – water and oil on canvas. All the paintings from the series “Eruptions” (2009) as well as “Oil and Water. Transgression of Material” (2019) is approximated to the human size. These works are somewhere in between the paintings and objects. It’s a paradox because the body of the painting cannot be plainly white. But at the same time, each object has all elements of the painting in it – dynamics, composition, texture. In my paintings, I invest the material with the human features and simply create the conditions for the internal catharsis. The material strives to follow the human. It tries to grow and progress.”
Serhiy Savchenko is an extremely multitalented and diverse person. It is impossible not to admire him. Savchenko’s works are placed in the important private collections in Ukraine and overseas. Oil and Water. Transgression of Material represents the stream of the concentrated transformative living energy that the artist has fully experienced himself before expressing it on the canvas. According to Savchenko, these paintings could be viewed as the porotypes or the symbolical imprints of human alike anthropomorphic copies of the mythological demigods. They are designed to initiate the process of transgression for the purpose of opening the new third dimension, the dimension where the Ultimate Creator reveals itself.