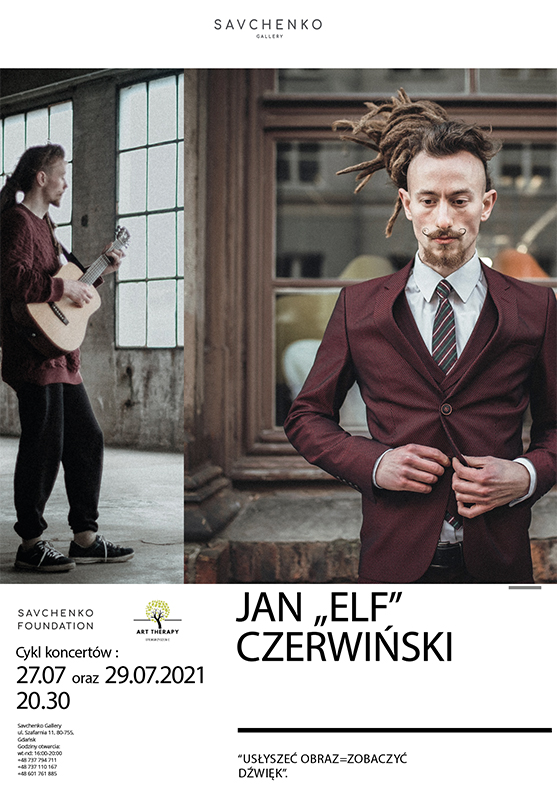 “Hear the picture – see the sound”.
A series of concerts in the “Savchenko Gallery” art gallery.

Organizer: Savchenko Foundation In cooperation with the association “Art Therapy”
We want to combine musical and visual art. The series would present the modern music of the young and experienced artist Jan “Elf” Czerwiński in cooperation with various musicians (in each concert with someone else), or solo. They have the chance to play with an experienced artist and perform in a location in the city centre with an audience every day. We want to be a unit that supports young artists not only related to painting but also music. Young and talented people need a place where they can show themselves and delight us with their creativity.

The Savchenko Foundation has a place in a great location in the centre of Gdańsk (Savchenko Gallery at 11 Szafarnia street, U10). We want Szafarnia Street to be associated with culture and young art, which, unfortunately, is not always possible to appear in places located in the very centre of the city. We believe that at the same time it will bring many benefits to the street community and will integrate various social groups. Thanks to the concerts planned by us, we will revive the street spirit and influence its identity. We plan to have free admission to the concerts. Thanks to this, residents of Gdańsk and tourists can get acquainted with local music activities and enjoy the sounds surrounded by wonderful works of art. Jan “Elf” Czerwiński from Gdańsk – a character whose artistic activity is based on the beatbox skills acquired in 2006 and recognized at the national championships (Polish Champion, Polish Beatbox Battle 2018 and 2019, Loop Station category, TOP4 WBW Beatbox 2017 Solo). Since then, the artist has been developing as a musician, showman and announcer in the rich Tri-City environment, creating and supporting such projects as the B’loop duo, Fala Changes, Muzalians, MusicEverywhere Choir. (be it live, or with the use of effects processors and looping stations) drawing from many circles, but usually oscillating within the reggae, d’n’b, rock, house genres. These compositions find their place at concerts characterized by a relaxed atmosphere, but also in the theatrical space (Mololo’s performance “Little Red Riding Hood in gotik stajlu”, which was in the final of the competition for the best independent theatre performance “The Best Off”, “Don’t do  Scenes” of the group project of the Sopot Dance Theater, “Sen” of the Museum of the Second World War in Gdańsk.